Abstract
Today’s CO2 atmosphere concentrations will lead to devastating increases in global temperatures and sea level over the thousands of years that cold deep ocean waters warm up, even if no more fossil fuel CO2 is added. Long-term impacts shown by climate records are much greater than IPCC projections, which are politically mandated to only include short-term initial responses. They ignore 90% or more of the long-term climate impacts that will affect future generations for millions of years unless CO2 is rapidly reduced to pre-industrial levels, giving policy makers a false sense of security. Even complete emissions reductions cannot remove the existing CO2 excess already in the atmosphere, only increased carbon sinks can do so, and only soil has the capacity to store it in time to avert runaway climate change. CO2 can be reduced to safe levels in decades if 1) current carbon farming sequestration practices are applied on a large scale, 2) lifetime of soil carbon storage is increased with biochar, and 3) with large scale restoration of coastal marine wetland peat soils, especially using new electrical stimulation methods. Regenerative Development strategies to reverse climate change by increasing soil and biomass carbon need to be implemented by UNFCCC.
Keywords: CO2 sequestration, soil carbon, lifetime, burial rates, stabilization time, reversing climate change, regenerative development

CO2 in the atmosphere (>400ppm) is already way above the pre-industrial (270ppm) levels consistent with modern global temperature and sea level, and millions of years of ice core and deep sea climate records show that current atmospheric CO2 levels will lead, over thousands of years, to steady state global temperatures and sea levels around 17 degrees Celsius and 23 meters higher than modern levels (Goreau 1990, 2014; Rohling et al., 2009).

It takes thousands of years for this response to happen to the CO2 already in the air because the deep ocean, which is around 4 degrees Celsius and holds nearly 95% of the heat in the earth climate system, takes 1600 years to turn over, and until the deep ocean warms up we won’t feel the full effect at the surface. This time lag is ignored in IPCC projections. Once the earth enters a super Greenhouse, like those the last time when CO2 was last 400 ppm millions of years ago, temperatures and sea levels were indeed around 17 celsius and 23 meters higher respectively (Rohling et al., 2009). The excess CO2 (and temperatures) will take from hundreds of thousands of years to millions of years to be finally buried in sediments and geologically removed from the system (Goreau, 1995). The oceans cannot serve as a major sink without turning them into dead zones stinking of hydrogen sulfide and devoid of life above bacteria.

However, there is a vastly faster biological short-circuit to the slow geological burial of CO2, namely rapid enhancement of biomass and soil carbon sinks, especially in the tropics, which could stabilize CO2 at safe levels rapidly (Goreau, 1987, 1990, 1995, 2014). Worldwide we have already lost about half the carbon in the Earth’s living biomass, and about half the carbon in soils that have been converted to farming and grazing, but restoring these natural CO2 sinks (“Geotherapy”) can absorb excess fossil fuel carbon at the lowest cost.

2) Determine how quickly CO2 can be stabilized to prevent extinction of coral reefs and flooding of low-lying coasts, based on quantity and quality (long-lived fraction) of soil carbon sequestration and global atmospheric CO2 input-output models.

3) Identify the specific methods and locations for the fastest and most effective reduction of CO2 to safe levels.

The rate at which CO2 can be stored in soil can be done depends on the quantity and quality (in terms of lifetime) of carbon sequestration, and the target. The “safe” CO2 target in terms of global temperature and sea level changes is identified as preindustrial CO2 levels from nearly a million years of Antarctic Ice Core, fossil coral, and deep sea sediment climate records.

IPCC model projections are not used because they seriously under-estimate long term impacts due to use of the wrong time horizons for calculating impacts. Steady-state temperature and sea level for TODAY’S 400 ppm CO2 level are around 17 degrees C warmer and 23 meter higher than now (Rohling et al.: 2009; Goreau, 1990, 2014), and it takes thousands of years for the deep ocean to warm up, only then we will feel full impacts. IPCC estimates don’t include this lag.

To meet global Geotherapy goals of restoring planetary life support systems to health, not only is increased soil carbon storage needed in every terrestrial habitat and ecosystem, but increases in soil carbon storage lifetime will also be essential. We calculate here how long it takes to reduce atmospheric CO2 to safe preindustrial levels and show the results graphically as a function of the global increase in net carbon burial on the land surface (the soil carbon sequestration quantity parameter), and as a function of the fraction of long-lived carbon that does not decompose (the soil carbon sequestration quality parameter).

Current agricultural practices only return about one ton of carbon per hectare per year, and very little of this, perhaps 1% is long lived, so typical practices would take thousands of years to drawdown the excess, coral reefs will die, and coasts flood. On the other hand, best practice carbon farming is capable of burying tens of tons per hectare per year (Toensmeier, 2016), and using biochar up to tens of percent of soil carbon can be long lived, which would allow the dangerous excess CO2 to be removed in decades, and avert the worst runaway global climate change impacts (Figures 1 & 2). 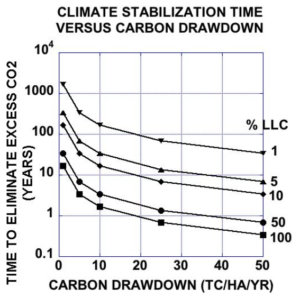 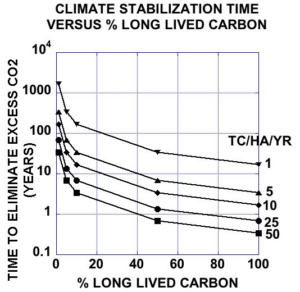 Two critical leverage points can greatly increase soil carbon lifetime: biochar and marine wetlands. If properly made and applied, Biochar can be applied to any soil, is resistant to decomposition, and lasts centuries, millennia, or even millions of years in the soil, while retaining soil water and nutrients for plants and increasing soil fertility, and providing carbon-negative renewable biomass energy (Lehmann & Joseph, 2009). Biochar can be applied to any soil and is best made from invasive weeds preventing ecosystem recovery. Biochar energy is renewable and carbon negative. Biochar greatly increases soil nutrient and water holding capacity, but is effective only if mature and charged with minerals from rock powder and compost. Raw biochar inhibits growth. Those using raw biochar instead of mature biochar get negative results instead of positive ones.

Soil has nearly 5 times more carbon than atmosphere or biomass, with around half in wetlands, the richest carbon soils. Wetland soils have about half of global soil carbon, with highest carbon content of all soils because lack of oxygen severely inhibits decomposition. Marine wetland soils (salt marsh, sea grass, mangroves) occupy less than 1% of the earth surface, but hold about a half of wetland carbon and a quarter of global soil carbon (more than the atmosphere or biosphere), and account for about half the carbon deposition in the ocean. Newly developed methods now allow rapid regeneration of marine wetland soils and carbon storage, which will be one of the most effective soil carbon sinks for the cost and area required, while providing valuable benefits for shore protection and fisheries habitat.

Marine wetlands, mangroves, salt marshes, and sea grasses, covering around 1% of Earth’s surface hold more carbon than the atmosphere, burying around half the carbon in the ocean. Marine wetlands are the most rapidly vanishing ecosystems, their restoration would provide largest carbon sinks in the smallest areas for the least costs, restoring critical fisheries nurseries and protecting coastlines from erosion. Most efforts to restore marine peat soils fail because new plants wash away before their roots can grow. These problems are overcome with Biorock electric stimulation methods, allowing sea grass, salt marsh, and mangroves to be grown where all other methods fail, and expanding carbon-rich ecosystems seawards where they are rapidly eroding away (Goreau, 2014).

Using known and proven regenerative methods could prevent runaway climate change within decades if governments are serious about funding rapid action. Failure to do so means runaway climate change (the equilibrium temperature and sea level for today’s CO2 concentration of 400 parts per million is around +17 degrees C and +23 meters higher than today’s levels) that will last for millions of years before they go away as the dangerous excess carbon from fossil fuels is gradually buried in marine sediments. Such runaway climate change will guarantee extinction of coral reef ecosystems, which are already are at their upper limit, have mostly died from high temperature in recent years, and can take no more warming, while causing billions of refugees to flee flooded islands and coasts. Those changes are what fossil fuel “business as usual” inevitably commits the world to unless regenerative development is systematically and urgently applied to reverse climate change.

Regenerative development strategies increase soil carbon storage to reverse climate change and stabilize CO2, temperature, and sea level at safe levels within decades. Emissions reductions alone cannot reduce CO2 to safe levels on any time scale. Carbon farming can store CO2 excess within decades, and produce carbon-negative sustainable energy, if long lived carbon is increased. Carbon farming can stabilize CO2 in decades if quality and quantity of carbon farming practices are increased. Failure will result in runaway climate overshoot that could last millions of years. The longer action is delayed, the more difficult and costly stabilization will be, until it finally becomes impossible.

Two strategies maximize soil carbon sequestration cost-effectiveness: biochar and marine wetlands: biochar carbon is stable for thousands to millions of years, whereas marine wetland peats are the richest soils in carbon because lack of oxygen prevents decomposition. Regeneration of mangroves, sea grass, and salt marsh peats could sequester the needed carbon in around 1% of the earth’s surface.

The Regenerative Development to Reverse Climate Change strategy of the Commonwealth Secretariat, 52 countries and 2.5 billion people, which will be proposed at UNFCCC in December 2017, aims to solve the problem of runaway climate change for future generations by large-scale increase of biomass and soil carbon sinks.

Current state-of-the-art of carbon farming and soil sequestration (Toensmeier, 2016) can draw down the dangerous CO2 excess in decades only if implemented immediately, but delay in doing so will require increased lifetimes of soil carbon storage in order to do the job, cost more, be slower, and allow greater damage from climate change. The techniques to solve the problem are all available, all that is needed to implement them is intelligent, informed, educated, and far-sighted global leadership.