A new Soil Carbon Alliance White Paper presents the first calculations of how fast climate can be stabilized at safe levels as a function of regenerative management carbon drawdown, and the fraction of carbon that remains in the soil:

Atmosphere CO2 can be reduced to safe levels, preventing runaway global warming and sea level rise impacts, within decades if global carbon sequestration rates in biomass and soil are increased by modest amounts, even at the low end of current carbon farming practice.

Already we have overshot the safe level of CO2 for current temperature and sea level by about 40%, and CO2 needs to be reduced rapidly from today’s dangerous levels of 400 parts per million (ppm) to pre-industrial levels of around 260 ppm.

Millions of years of long term climate data shows that for the current CO2 concentration, 400 ppm, the equilibrium global temperature is about 17 degrees C (30 F) warmer than today and the global sea level about 23 m (75 feet) higher than today.

The reason these changes are much longer than IPCC predicts is because IPCC’s mandate is to predict changes over decades to 100 years, but it takes 1600 years for the ocean to mix, and until the deep sea, which holds around 95% of the heat in the planet climate system, and is now just above freezing, warms up, we won’t feel the full temperature effects of CO2 increase for thousands of years!

The impacts will be far worse than IPCC projects because they used the wrong time horizons, which were based on political expediency, not scientific facts. Unsound science has led to bad public policy focusing purely on emissions reductions. But emissions reductions cannot remove the excess CO2 prevent long term impacts of global warming and sea level rise, which cannot be reduced to safe levels without increasing natural sinks, of which the largest is soil carbon, nearly 5 times larger than the atmosphere or the biosphere.

The soil ecosystem not only is the largest carbon sink we can increase quickly, it also maintains about 99% of the living biomass on the planet, and regulates atmospheric chemistry, global climate, sea level, and water supplies, yet we treat soil like dirt: soil is not even mentioned in UNFCCC!

Only returning the excess CO2 from where it is most dangerous (in the atmosphere) to where it is most stable and provides the greatest ecosystem service benefits (the soil) can stabilize climate quickly. The techniques to do so are well established, they are just not being used enough!

We only have a very small window of opportunity left to prevent global warming caused heat-stroke mass-extinction of coral reef ecosystems. Carbon farming can only do so if the percentage of long lived carbon, which lasts in the soil without decomposition, can be increased significantly.

Here I show the quantitative relationships between the time it takes to draw down the dangerous 140 ppm CO2 atmosphere excess as a function of the global increase in drawdown rates (in tons of carbon per hectare per year, ranging from 1 to 50, typical of current low level carbon farming to the current state of the art), and the percentage of long lived carbon that remains without being decomposed (ranging from 1 to 100%).

Current rates of carbon farming at typical current levels would take thousands of years to draw down the dangerous excess CO2, but state of the art methods of soil carbon sequestration could draw it down in as little as decades if the percentage of long lived carbon is raised to as little as about 10% (Figures 1-3 below). New research presented for the first time at World Soil Day, December 5 2016, shows how increasing both the quantity and quality of soil carbon affects the rate of climate stabilization at safe levels, and determines which strategies work best in the narrow time window we have to reverse severe runaway global warming and sea level rise.

While all soils can, and must, be managed to greatly increase soil carbon there are two critical soil leverage points that will be the most effective to reverse global climate change, namely increasing the two most carbon-rich soils of all, Terra Preta, and wetlands. These are the most effective carbon sinks for very different reasons, Terra Preta because it is 10-50% carbon by weight, composed of biochar, which can last millions of years in the soil, Wetland soils can be up to pure organic matter, because lack of oxygen prevents organic matter decomposition. Wetlands contain half of all soil carbon, and half of that is in marine wetlands, which occupy only about 1% of the Earth’s surface but deposit about half of all the organic matter in the entire ocean. Yet they are often ignored in both terrestrial and marine carbon accounting. Marine wetland soils have more carbon than the atmosphere, but are being rapidly destroyed in the misguided name of “economic development”.

Safe climate stabilization on the order of decades can still be achieved using known technologies if it is started immediately on a global scale. The longer this is delayed the longer it will take to do, and the more extreme conditions of exceptionally high carbon sequestration and percentages of long lived carbon will be neede. The costs will rise and the benefits diminish for andy delay in implementing them. Doing so is our only hope for saving corals, which are already above their upper temperature, have already largely died from heat stroke caused by global warming, and cannot possibly survive 2 degrees warming. 2 degrees is NOT an “acceptable” level of warming at all, it means extinction of coral reef ecosystems, and the shore protection, fisheries, beaches, tourism, and biodiversity they uniquely provide.

In the short run, Biorock electrical technology can save coral reefs from high temperature mortality, and rapidly grow back coral reefs, oyster reefs, salt marshes, sea grasses, mangroves, fisheries, and beaches, however in the long-run only large-scale long-term regenerative development started now can save them in the decades, centuries, millennia, and millions of years that will follow if we don’t draw down the dangerous excess CO2 to safe levels.

The results of these new findings and restoration projects can be seen in videos of the 2016 World Soil Day and related presentation videos at:
Soil carbon to reverse climate change:
The Oceans, Global Warming, and the Carbon Cycle:
Large Scale Marine Ecosystem Restoration: 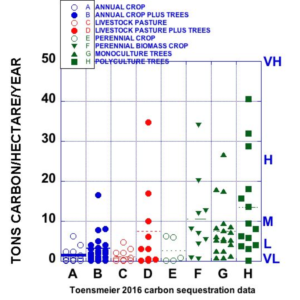 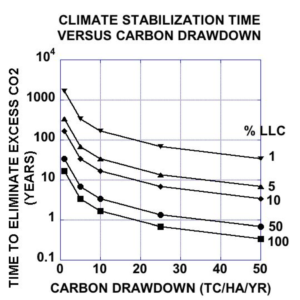 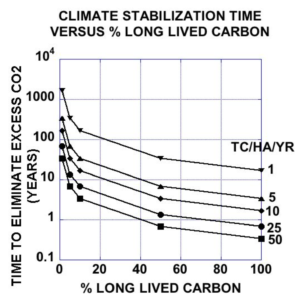